:
Top of the Week: The Damaging Theology Hijacking the Church Today
Orthodox Jew: Too Much Jesus, Too Little Jesus
End-Times Truth: The Rapture Reveals a Split Church
What Scripture Says About Believers Running for Public Office
Former Satanist Recalls Gratifying Moment His Brother Received Christ Prior to Death
⇑ back to "The Strang Report"

I've been a guest on Perry Atkinson's radio show Focus Today in Medford, Oregon, several times in the past, and we've had some great conversations about my previous books and what's happening in the kingdom and culture today.

But I wholeheartedly believe this is the most important interview Atkinson has conducted with me to date. Not because I have another book to promote, God and Cancel Culture, but because I believe that the subject matter of the book is the most important I have ever written about. The book is set to publish on Sept. 7, and you can pre-order it on amazon.com and on stevestrangbooks.com.

As everyone knows by now, the liberal left's attempt to cancel God out of our culture and to persecute anyone who gets in their way is accelerating at an incredible pace, not only here in America but around the world. People who are pro-abortion, who are pushing the LGBTQ agenda and other non-biblical aspects of our society are doing everything they can to silence the voices of God's people.

We all know who will reign victorious in the end, but it's getting pretty rough right now, and Satan is ramping up his efforts to steal, kill and destroy from the people of God, as it says in John 10:10.

I so appreciated this interview with Atkinson because great questions were asked and answered, and I hope you will enjoy it and share it with your friends on social media.

The first thing Atkinson asked me about my book was if it was too late for us to fight back against the cancel culture. I responded with a resounding no.

The subtitle of my book is "Stand Strong Before It's Too Late," I told Atkinson. "I wrote the book because of what's going on in this country. People know me as a publisher, but I also wrote several books about Donald Trump. But Donald Trump is not our president now.

"One of the things I predicted in my last book was what would happen if he lost. Sadly," I explained to Atkinson, "we are seeing a lot of that come to pass. The manifestation of all of this stuff that's going on is what I called cancel culture. No, of course, in some ways cancel culture has been going on for millennia, with one ethnic group trying the cancel the other back in the pagan days. Certainly, the Romans tried to cancel Christianity. There are many examples throughout history.

"But in our day, we've had freedoms—freedom of religion, freedom of speech—and those things are being cancelled in a way that's absolutely unprecedented in the land of the free and the home of the brave," I said.

Atkinson and his radio station themselves have been a victim of the cancel culture's long reach. Atkinson told me that they were the first broadcast network to be canceled from YouTube, and YouTube wound up confiscating over 15,000 of their videos from the channel.

Atkinson told me he had read an article where more than 30 pastors a week are now being taken down from either Facebook, Twitter or YouTube. The acceleration is coming very hard against the Christian message.

"The book really does a deep dive into what you're talking about," I told Atkinson. The most concerning thing for me is the effort to cancel Christianity in our culture. The other side has an agenda, and they want to cancel anything that stops their agenda. What the Bible says about things is absolutely last on their list. People want to say, 'We won; you lost; go away.'

"They are canceling people one by one. It's hard to get into an outcry over that because people don't know each other, and they can't really prove it. And, all of a sudden, they're gone," I said. 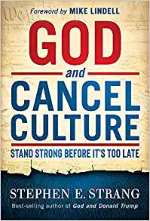 "It's complicated, and there's not one solution, no one thing we can do; there's no silver bullet. But if we stand up to the bullies ... the bullies back down. If we learned anything from Donald Trump, we found out what happened when one brave man stood up to the bullies. He needs to be an example to all of us in our own way, in our own space, when sadly we're going to be canceled one by one if we don't stop this," I said.

Atkinson and I talked about so many more things that are eye-openers, so I encourage you to listen intently to this relevant podcast.

Again, my book is set to publish on Sept. 7, and you can pre-order it on stevestrangbooks.com. When you do, you'll get $120 worth of free gifts, including four e-books and a subscription to Charisma magazine.