Six-time New York Times bestselling author Jonathan Cahn is getting ready for his May 12 movie theater event, The Harbingers of Things to Come. The one-night-only theatrical release will appear in 800 theaters nationwide. I sat down with him recently to ask what he hoped to accomplish with his new movie.

"We are witnessing America rapidly accelerating away from God," Cahn says. "The messages of The Harbinger are prophetic revelations and warnings for God's people to know what's happening, where we are going, and where we are."

Cahn then describes what the movie does. "I believe it's like taking a prophetic trumpet call [and] putting it into a motion picture," he says. "By the grace of God, it's opening up all over the country in movie theaters. It's amazing to me. I just know America needs something gigantic, [a] revival, and I pray that God would use this."

He also hints at a detail that will appear in the movie. "Something was recorded, kind of in secret, in a prophetic gathering, which I alluded to at the end of The Harbinger," he says. "You're actually going to see these prophetic images which have never been seen."

When I tell Cahn that some of the theaters in New Jersey are almost sold out, he jokes, "I may not be able to see it." Cahn continues, "We're trying to do group sales for people in the congregation, and we found out from two people that it's just about sold out. We're going to see if we can ask them to put it on more screens."

With 800 theaters and the 50 biggest metropolitan areas covered, The Harbingers of Things to Come will be an evangelistic opportunity for many American Christians.

"We've never done it in the theater," says Cahn. "We were praying about it and asking, 'Lord, confirm it if it should be, and it just took off. The momentum of this took off very powerfully. I don't know if there's anything in the movie theaters quite like this."

"I'm hoping that everybody makes the most of this, spreads the word, tells their pastors, and that pastors tell their congregations," he adds. "We're praying for revival. We're praying for a wake-up call." 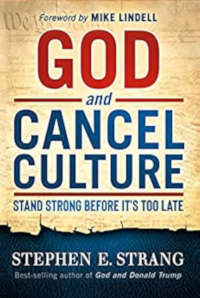 Reserve a ticket for you and your family now at fathomevents.com. View the movie trailer above or at this link.

You'll also want to check out the special half-price offer on my most recent book, God and Cancel Culture, at stevestrangbooks.com.