More than 4,000 new churches opened their doors in 2014, outpacing the 3,700 that closed, according to estimates from the Nashville-based research organization based on input from 34 denominational statisticians.

On average, 42 percent of those worshiping at churches launched since 2008 previously never attended church or hadn't attended in many years, LifeWay Research finds in an analysis of 843 such churches from 17 denominations and church planting networks.

"In winning new converts to Christ, church plants are light-years ahead of the average church because of their focus on reaching the unchurched," Stetzer said.

"Healthy new churches have an outward focus from day one, communicating every month that the goal is to be a multiplying church," Stetzer said.

Though some pastors bristle at new churches coming into their community, they have more to learn—and less to fear—from the startup down the street, Stetzer said.

One lesson is the value of time-tested methods. While most church plants use the Internet for outreach, 77 percent say word of mouth and personal relationships are the most effective forms of publicity. Only 6 percent say social media is most effective. Nearly two-thirds of new churches (63 percent) say Bible study is their primary small group activity. 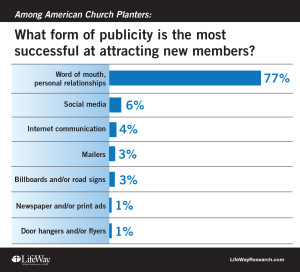 "It's not the most innovative things that matter most. It's the nuts and bolts," Stetzer said.

"An existing church can take notice and ask, 'Hey, are we doing those things? Are we making sure people in the community know we exist? Are we inviting people to come and making them feel welcome and all those things a church plant does?'"

In addition, Stetzer said, new churches can attract demographic groups that may be largely unreached by existing ones. Sixty percent of church plants aim to reach a cross-cultural or multiethnic group of people from the outset.

"It takes multiple methods to reach a diverse population," Stetzer said. "The United States from its founding has been a very diverse population. A one-size-fits-all church has never been part of the American equation.

"As much as ever, we need different approaches to reach different types of people."

Additional reports from the study will be available at newchurches.com.

Estimates of the number of 2014 Protestant church starts and closures are based on unofficial reports LifeWay Research gathered from 34 denominations that represent 55 percent of U.S. Protestant churches. The pattern in this large sample was applied to the non-reporting and non-denominational groups to provide the overall estimate.

For the original article, visit lifewayresearch.com.

See an error in this article? Send us a correction
RELATED TOPICS: Church | LifeWay